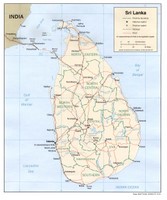 This island nation, located south east of India in the Indian Ocean, has not had an easy time in the recent past – Sri Lankans have experienced twenty years of civil unrest, and in 2004, the devastating Tsunami.

One organization which works to place volunteers teachers and other staff in Sri Lankan communities in need is VSO – Voluntary Service Overseas. VSO is currently experiencing a shortage of volunteers willing to work in a handful of the countries it serves, including Sri Lanka, and attributes this in part to the media portrayal of those countries.

While former VSO English teacher Barry Arnold says about Sri Lanka, and in particular the troubled north-east where he worked, “It’s a tragedy with no immediate relief in sight”, he also points out that “The country, unlike many in the Third World, has great natural resources, a friendly, courteous and educated populace, and some of the best potential for tourism in the world. Locals often say that before the conflict began, over 30 years ago, Sri Lanka stood comparison with Singapore and Hong Kong for economic potential.” He also notes that “the people have been let down by the quality of their leaders and their lack of vision. They have used the Tamil/Sinhala (Hindu/Buddhist) ethnic division as an excuse for their own shortcomings.” Despite the fact that he lived in the troubled north east, he reports in his piece Why Are You Outstanding? that he never felt personally threatened.

As there are not a great number of resources online for English teachers with Sri Lanka in mind as a destination, I dug up some Bootsnall Travel Stories to provide additional perspectives. Granted, these are from travelers passing through the country, not volunteers who lived there, but they still represent first-hand, positive experiences in Sri Lanka.

Read Lee Abbamonte’s Thoughts on Sri Lanka After The Tsunami to see his take on the role of cricket for Sri Lankans, and also check out Nicholas Lembo’s story about Adam’s Peak, one mountain sacred to followers of no less than four different religions. Finally, have a look at Connor Grennan’s take on a 2005 trip to Sri Lanka, (and don’t let his humor here lead you to believe he is only a joker: while he is neither an English teacher nor a VSO volunteer, he is nevertheless up to something good in Nepal – helping trafficked children).

One thing that stuck out to me is that most authors reported how little they knew about the country prior to visiting – and these are people who took the initiative to travel there. Given this general lack of knowledge about the country, it is fairly easy to imagine how media reports of tragic events can skew public perception. Read on to see what former VSO volunteer Barry Arnold has to say about living and working in the troubled north-east for two years.