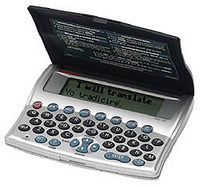 The sound of beeping and, from time to time, of automated, mechanical “voices” is one that does not trouble me in Eastern Europe, but which played nearly a daily role in my classes in Chicago. This is because in my three years in Eastern Europe, I have met exactly one student with an electronic dictionary (this “statistic” may be a good indication of the technological divide). In Chicago, where I’d estimate that more than 75% of my students were from Korea and Japan, nearly everyone had one.

Nowadays, if an electronic translator is available in your/your students’ language, and is produced in quantities great enough to make the price reasonable, it seems silly not to buy one. However, just as I would caution students against overusing traditional dictionaries in class – and in some cases using them at all – I would also advise them to avoid overusing electronic translators. The opportunity to quickly translate each new word is a temptation which often prevents students from developing skills in inferring meaning from context, which is essential. There are several sides to this debate, though.

EslHQ has a detailed article on the drama of the electronic translator – from the student’s perspective to the teacher’s, and from the importance of dictionaries in the learning process to their potential downfalls, this article has it all. There are also suggestions for ways of learning new vocabulary which do not depend solely on the use of a dictionary.

How prevalent are electronic dictionaries where you are – and do your students use them in class?