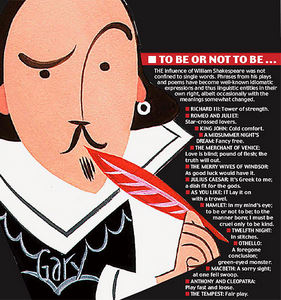 There were some fun English language trivia in The Daily Mail. I would preface this by saying: In a class with a syllabus to cover and limited time, I would probably use these only as fillers, or as some fun but still English-related cooler after students have just finished working intensively.

The first page – with phrases Shakespeare coined which evolved into fairly well-known idioms – you could design a short matching activity using some of the phrases (either match the phrase to the meaning or the first half of the phrase to the second), and set homework to write good sentences which illustrate the meaning of 6 or 8. In class, they could then read the sentences without the idiom, and the other team guesses which idiom is missing. I wouldn’t tell them this because it will make it more likely that they try to come up with good sentences, and not those specifically designed to trick each other. A fun variant would be to play Pictionary to revise them…though make sure you select those which lend themselves to being illustrated!

The pangrams might work out best for kids, or maybe for those new to the Latin alphabet. I’d invent a few decoys – other long sentences which use a lot – but not all – of the letters of the alphabet. And students have to identify which ones really do include all the letters. Or, if you want to save yourself the creativity or re-typing up, have them tell you which letters are extra (each sentence includes all the letters of the alphabet but also has more). Communicative? Practical skills they will use in the real world? Not exactly, but still a part of learning, and good to serve the purpose of a somewhat mindless but tangentially relevant task.

For spoonerisms, you could give your advanced students the wrong sentences – see if they can identify what they mean, why they are odd, and then if they can figure out what the “real” sentence is.

Any other fun ways of adapting these?