TEFL As Psychotherapy (Or, Fringe Benefit Of TEFL #7) 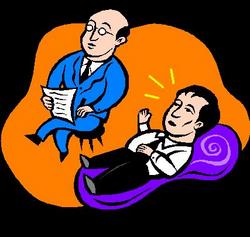 I’ve come across the opinion that teaching one-to-one students can be like psychotherapy of some kind (for the students, not the teacher!), and I think I agree. Not that I’m an expert on psychotherapy or anything, though my readers may well be in the position to tell me that perhaps I should get some after following my posts for a while!

It’s somehow more noticeable for me with male students. Maybe because when you think about a “psychotherapy”-type conversation, it’s much more common for women to talk about “that kind of stuff” with either other women friends or boyfriends or strangers at Starbucks (is that just me?) and so on, but not so common for men to do so. While it can be odd for me to find myself in more personal conversations with people I don’t know very well of either gender, it is just more striking when it’s a guy; sometimes I’m not quite sure how to categorize it either.

I don’t believe students look to their English teachers for answers or advice, nor do I think they even look at the situation like they are unloading or whatever, but the fact that there is therapeutic value in “being heard” is rather widely accepted. When the English teacher is a foreigner who doesn’t really play a role in the person’s regular life…and will just leave after a year or so…I think that sets the stage well for this type of situation. Not always, maybe not even often, but more than you might expect.

I have met a handful of students who actually kind of go on about their lack of confidence in English. I don’t want to say it’s unimportant; certainly it is important to note if a lack of confidence – rather than lack of knowledge – is an issue. And the student’s own recognition of that is significant too. However, I’ve been in situations where I just want to say “Okay, instead of dwelling on this, let’s get a move on and stard doing English.” But for whatever reason, they want to speak about it. At length. Again and again. (And really, who am I to call someone out on going on at length…)

I wouldn’t say I have access to student’s deep dark secrets or anything, but it can surprising what comes up on some students’ own initiative. I also don’t mean to imply that this is interesting for gossip value – but just that (sometimes), as an EFL teacher, you are in a position to really see how someone else thinks, in many cases more or less without needing the length of time you would in an average work situation to reach that point naturally.

And I do believe that this is fringe benefit #7 of TEFL.