TV In The TEFL Classroom: Friends 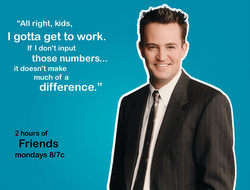 I’ve used Friends with Advanced level classes; I’ve found it takes quite a lot of preparation to do it well, but once it’s done you can use it again and again. I don’t use all of these activities all the time, but the stronger your students are, the more you can add on. Or, if some students are up for an extra challenge, give them the opportunity to do more.

I’ve used the episode where Chandler dates Rachel’s boss (with the goopy mascara?) – and Phoebe builds a funky dollhouse that catches on fire – several times. Sometimes I start with a list of six to ten quotes from the episode (“You can eat all the furniture” “Dinosaurs don’t go “ruf-ruf” “This was great. I’ll give you a call. We should do it again sometime”); they can try to guess first of all in what context someone might say them (on a date, etc.) or what they mean, and then see if they can guess what show the quotes come from. You can also have them listen for those quotes during the episode and record their order and who said them (and for some, an explanation of what they mean).

Another ongoing task, which ties in well especially if you’re doing narrative tenses, is to assign students a character (or let them pick, but make them do it before you start showing the program) and write a one or two paragraph long “diary entry” from that character’s perspective, about what happened during the show, using narrative tenses.

Especially if you want them to do this, it’s not a bad idea to do short “character profiles” before you start, to make sure people can identify the characters. Way back when, in 2002, I encountered a guy who had never seen Friends; the rest of the class was stunned too, but it took him some time to figure out who he was following, and it was harder for him to do the writing task because of this.

If you can find a discussion theme connected to the show, give them a heads up as to what it is, and even have a short discussion about the themes before you watch; then see if they can explain how the show was relevant to that. For this episode it might be “white lies” or “friend/sibling rivalry”.

If I show the whole episode (I’ve found that a 23 minute show can easily fill a 90-minute class) and especially if I want to give other tasks, or ask questions about vocabulary, I make a handout dividing it into “scenes” with a question or two, and occasionally a vocab term for each. If you’re going to ask them to predict or infer vocabulary, keep in mind this will take ages compared to the length of the scene, and you may well need to show it twice. In one of the very first lessons I observed for my CELTA, an experienced teacher was showing Friends, and asked students to predict answers to the questions before watching; I find this helps with comprehension and the questions themselves can give general clues about what’s to come, so I use this a lot. I might show three or four scenes at once though, then stop to check and predict again.

At some point it would be great to work out a way to share some of the materials I’ve generated like these; for now, rest assured: if I can make up questions – so can you!