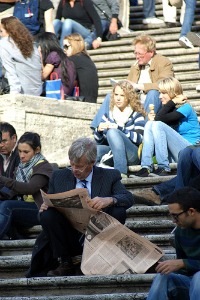 One group for which teaching English is a great way to make a little money while traveling is the student who’s going to school in another country. Study abroad travelers often have restrictions on their student visas that don’t permit working while they’re in school, but if you’re just doing a bit of English conversation for pocket money it can be done without causing an issue – especially if you’re in a country like Italy.

Of course, in order to finagle a gig teaching English in Italy in your spare time, first you’ve got to get to Italy! There are lots of opportunities to study abroad in Italy – in fact, it’s the 2nd most popular country for Americans looking to study abroad. Schools all over the country accept international students, although some places are more popular than others. Some universities have particularly good foreign language programs if you’re really trying to perfect your Italian, and some destinations are seen as better bases from which to explore the country.

Unfortunately, finding cheap airline tickets to any Italian airport can be a problem. Flying into Paris or London or even Frankfurt or Amsterdam never seems as expensive as getting tickets to Italy.

Why? It’s not clear – but anyone on a student budget is eager to cut costs wherever possible, so if you’re having trouble finding a cheap fare on tickets directly to Italy then try looking for the cheapest fare you can find to any major European gateway. From there, you can book a flight on one of Europe’s discount airlines into whatever Italian city you’ll be studying in.

For instance, you can often find great London travel deals – which means your next step is to hunt for cheap flights from London to Italy. Find a bargain there, and your work is done.

As for accommodation, you’ll most likely have worked out student housing with the study abroad program you’re in, but if you’re traveling through the country and you need a place to stay don’t just assume the only cheap rooms are in hostels. You might not find as many cheap hotels in Florence, for instance, since it’s a popular tourist city year-round, but in less-popular cities the 1- and 2-star hotels can often be really inexpensive. Also keep in mind that Italian accommodation options like family-run inns and even farm stays are often cheap ways to stay.