“Backpacker” Teachers As Axes Of Evil? 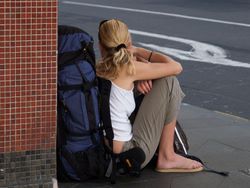 Threads about the term “backpacker” in the context of ESL are regular occurrences at Dave’s ESL Cafe. Can we retire the term “backpacker”, why do they let “backpackers” teach, are “backpacker” teachers the reason why “real” teachers get a bad rap? My somewhat cynical opinion is that some people are happy to make distinctions, especially when doing so means they come out on top and can say “I’m better than that”. I certainly don’t think this is unique to the field of teaching but this is obviously an example that many in this field can relate to.

I suppose in holding a view like this, I may come across as being “on the side” of “backpacker teachers” or something, but I don’t see that as my position. I don’t consider myself a backpacker teacher, and I don’t think that lacking a DELTA or MA makes a person so. It’s unfortunate if some who have such qualifications are incapable of distinguishing between someone on holiday and someone responsibly doing a job which they may or may not get a further qualification in, or which they may or may not continue to do for the rest of their life.

It occurs to me of course that plenty of people who do have advanced qualifications do not treat others as less or do not look down on them (us) for the lack of those degrees.

And in fact I suspect teachers like this, who aren’t concerned with labels, make up the bulk of teachers. Those with an ax to grind may gravitate towards message boards or other venues to vent. Certainly there are individuals who do not take the job seriously, but in my view that is something related to what they actually do, and not whether they have a particular qualification or teach as a means of living abroad.

I have probably been influenced by working in a country with high unemployment, where people often do jobs outside the field they studied and sometimes outside the field of their interest just because they need jobs. It’s obviously very easy to look idealistically at a situation like this, when I can leave it and go back to my own country where it is a realistic possibility to train in your chosen career and then get a job in it. But I think there is something positive in realizing that sometimes a job is just something you do because people do jobs; it doesn’t have to be your life’s work and doing a job because of a particular advantage it offers (in the case of TEFL, the possibility of living abroad) is not that different from, say, doing a job because it pays well. It may not be the ideal situation forever, but I think few of us would say it damages a profession to have people in it for the money, or those who choose a higher paid job are doing something wrong.