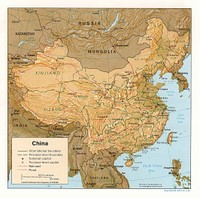 Nick – who recently shared his top 5 tips for new teachers – chose China because of his interest in Taoism, and says “I did expect China to be rich in cultural history as well as a place for contemplation and Tai Chi….ha ha, this was very wrong…”

Still, he seems to have loved it and plans to return in September. He calls China “very challenging for travel and the traveller” but believes that while simple tasks like eating out can be hard, “this is part of the adventure of China too!” [I haven’t been to China but I do think Pigs In The Toilet author Jeff would agree].

Nick started out on a 3-month volunteer program with a company called Realgap; the first month consisted of orientation and training.

“The first comment is Realgap are a profit making organisation, so this type of program isn’t cheap! However, what it does give you is a placement and some stability. You invariably arrive with other volunteers so you have company, people to share an experience with, and they also provide a guide to look out for you and help you around when you first arrive.”

He was placed in a middle school and lived in shared dorm accommodation with two others, teaching twelve “oral English” lessons of 40 minutes each per week.

As for the training and orientation, Nick says “many parts of the training program were hit or miss”, but points out that the group did actually get some of the fee refunded because of this. He also didn’t feel that the Mandarin lessons were suitable for the group’s level.

In spite of this, his overall verdict is a thumbs up: “For me at least, it was the ideal path toward TEFLing. I would not have had the confidence to arrive with zero or minimal experience, on my own, in a country like China. It also gave me a chance to test the water before making a longer term commitment. For someone who is less confident or has little to no experience, I would recommend it as a safe introduction to China, even though it is a little costly.”

Specifically, he liked that during the orientation period he had a chance to meet local teachers and students, observe lots of lessons, and just generally settle in.

He points out that especially in his off the beaten path location, where there aren’t many foreigners or English speakers, he did stand out: “everyone knows you, everyone stares at you”…but he felt respected and “to some degree “loved””. Nick admits that many things can be frustrating or even annoying, but says that “when I look back over the 7 months I have so far spent in China, I have some amazing, and sometimes funny, stories to tell, things that I think help to make China the magical travel destination that it surely is. So as random as China may be…the respect, welcome and attention I get in China makes it feel like home pretty quickly!”