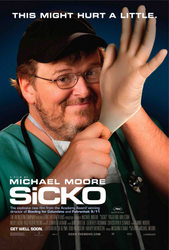 Then again, maybe not.

I recently attended a showing of Sicko at a film festival, and Mr Moore himself was there to “present” the film. Unlike some other directors in attendance for showings of their own films, he didn’t take questions from the audience. He did, however, take the stage at the end and speak. After he said thank you in the local language, he began to speak….somewhat.slowly….with odd pauses.

This could have been…a nice way…to ensure that non-native English speakers…could understand him….though it might have been more appropriate….if there hadn’t been a woman there translating everything he said. Kinda made me think about grading your language.

Okay, okay, this is all true but I’m mainly trying to fit in a post to brag about having seen Michael Moore. And the best part is: I was about two feet away from him when the crowd in the outdoor cinema parted to let him exit. Wow. I might have considered trying to talk to him and convince him to do a film about the TEFL industry, or just jumped in for a quick “nose rub for good luck” or something if he hadn’t been accompanied by about ten beefy bodyguard-type people. Not really the right time to be the one weird American in the audience.

In general, I think Michael Moore is pretty cool. I think it’s important that films like his get made, even though I’m not 100% okay with his “poor innocent American people manipulated by evil leaders” message [where are the quotes of the US citizens who think poor people don’t deserve health care because their poverty is their own fault? I certainly don’t agree with that take, but there are people who would]. I thought Sicko was very worthwhile and a notch above his last two.

It’s perhaps a little US-centric to show Sicko in an EFL class, but I think that at least some of the time, people appreciate Moore’s films just because he deals openly with problems in his own country. And if you have students who come from a former socialist country, they’ll especially like the clips of and comparisons to socialist propaganda films.

In conclusion, go see Sicko, and come back to the TEFL Logue for details on the letter writing campaign to make Moore’s next film about EFL. Additionally, let me know if you think a certain celebrity would make a good or bad EFL teacher – make sure to say why!